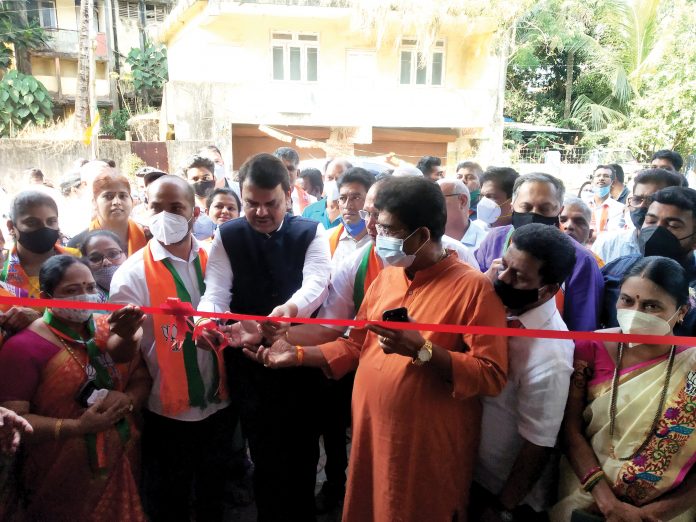 Staff ReporterMapusa/CurchoremStating that Mapusa or other constituencies does not need proxy leaders, BJP Goa election in-charge Devendra Fadnavis said, “Some people in Bardez have amassed wealth and think they can buy people, capture and rule Bardez. People of Mapusa have to make a decision about the one who will be the real representative for Mapusa, Joshua or (Sudhir Kandolkar) whose remote control is in Calangute. People want local leaders and all qualities are in Joshua”.Fadnavis was speaking after inaugurating the election office of Mapusa BJP candidate Joshua de Sousa in the presence of state president Sadanand Shet Tanavade, former minister and Siolim candidate Dayanand Mandrekar, Aldona MLAGlenn Ticlo, chairperson Shubhangi Waingankar and othersin Mapusa on Saturday. Targeting Congress leader Michael Lobo without naming him, BJP Goa election in-charge Fadnavis said that some people want to rule Bardez. Basically, BJP does not need those who control people through remote control and we don’t have such people in our party.“People want to capture all constituencies in Bardez and therefore in every constituency, these leaders have got a proxy” said Fadnavis.He further said that a young leader like Joshua had a short span as MLA and would do more work in the future as MLA.Commenting on Utpal Parrikar and Laxmikant Parsekar, Fadnavis said that BJP had offered Utpal two constituencies to contest the elections for the upcoming Goa Assembly polls, wherein in one of the seat’s was a traditional BJP constituency however, he refused to accept the seats and decided to fight the election as an independent.State BJP president Sadanand Tanavade said that some people are spreading propaganda against the BJP and have entered Siolim for their own interest to establish their rule. These people should first try to manage their own constituency first.Meanwhile, while speaking in Curchorem Fadnavis said, that public memory is short and people forget the good work done but remember what is not done. So there is a need to remind people again and again what good work has been done for them. Candidate Nilesh Cabral said the two time victory as an MLA of Curchorem is the real victory of party workers. BJP is the only party in which the workers work for the party without any expectation, he said.

Vasco: Revolutionary Goans (RG) and BJP are engaged claiming credit for getting locals employment at the Goa Shipyard Ltd (GSL). Even as RG said that GSL has assured them of giving jobs to Goans, Vasco BJP MLA Krishna ‘Daji’ Salkar and BJP functionaries stated that it was their efforts that played a major role in highlighting the employment issue. On Wednesday, RG’s Tukaram ‘Manoj’ Parab and St Andre MLA Viresh Borkar met the management of GSL to discuss the matter of employment opportunities for Goans. Parab and Borkar said that the shipyard’s management has assured them to give priority to recruiting Goans. They said that, according to available information, over 600 jobs had opened up at GSL, but only 30% Goans were employed. In other central government shipyards in other states, local people with knowledge of the local language are given preference during recruitment, but at GSL this is not happening, RG said. Parab and Borkar also stressed on the need for imparting training in technical skill to Goan youth. Meanwhile, the Vasco MLA posted on his official social media page: “Grateful to chief minister Goa Pramod P Sawant for calling this meeting on our request with T N Sudhakar CMD (addl charge) and HR head Goa Shipyard Ltd to address long-pending issues pertaining to local employment.”

Panaji: This time last year the fire and emergency personnel doubly risked their lives in the line of duty as they battled the ravages of the Cyclone Tauktae knowing full well they were exposed to the risk of Covid-19, which at that time was at the peak of its second wave in the state and several thousands has succumbed to the virus. &#8220;Our fire station alone registered around 400 calls. People began queueing up and politicians began sitting in the office and pressuring us to send teams to their areas as trees had fallen on homes, roads and electrical infrastructure,&#8221; a fire station operator said. &#8220;We ourselves had power supply cut off for around three days. Our telephones and UPS backup went off and our wireless systems stopped and fire personnel used their personal numbers to communicate. It felt like war time. At the same time people were calling with requests to sanitise areas where there was an outbreak of Covid-19,&#8221; he added. The trees &#8212; mango, banyan, nilgiri, casuarina, gulmohar, tamarind, jackfruit &#8212; that the cyclone brought down were huge and took fire personnel two to three hours to cut. The cutter they handled itself weighed five kilograms. Fire personnel also took the assistance of private tree cutters. They worked closely with panchayats and municipalities as well as the electricity department, checking with them each time about live wires, etc. Such was the impact of the cyclone that the teams would set off to attend to a call but end up clearing the damage caused by several other fallen trees along their way to be able to reach their final destination. &#8220;We would be on our way to attend to calls when along the route people would stop our vehicle and ask for help. The difference between this and other cyclones was that we had to be on our toes all the time. We managed to tackle it because of team work. Without that nothing would have been possible,&#8221; firefighter Sairaj Naik said. Blocked roads meant that it took firefighter Richard Trindade two hours to reach the Mapusa fire station to report for duty from Pernem, which was otherwise a 45-minute journey for him. Fire personnel got injured on the job, requiring stitches and other treatment. Many said it was not possible to carry out the strenuous work of clearing trees off roads, houses and power infrastructure and rescuing people from inundated areas with their masks on continuously. In one incident, with the rains and winds continuing, the branch of a tree came crashing down on the head and shoulders of one of Trinidade&#8217;s colleagues knocking the fire personnel unconscious for a few minutes while they were attending to another tree fall case. &#8220;He didn&#8217;t know what had happened and was taken by surprise. If he wasn&#8217;t wearing a helmet he would have been seriously injured,&#8221; Trindade said. In rescue operations from flood hit areas, some seniors were not ready to leave their homes and needed lots of convincing, he added. The Mapusa fire station that looked after almost the entire North coastal belt, which was badly affected, was kept on its toes. Some firefighters like Shaylesh G Tari were on leave, but all leaves were cancelled as the damage was too much to handle and they were all asked to report on duty early morning. &#8220;We may have cut up and cleared around 200 fallen trees during that week. We had handled cyclones earlier, but this one caused widespread damage to people&#8217;s property and electrical equipment. In addition, we tackled rain, heavy wind and Covid while on the job,&#8221; he said. Fire personnel worked overtime and even stayed over at the fire station for days to be able to attend to all the calls. Leading firefighter Vishnu B Gawas said his family was left worried each time he returned home from duty and prayed he wouldn&#8217;t carry Covid into the home where there were elderly and children. &#8220;It was a big risk working during the second wave, but we had to take it. We didn&#8217;t know when we would be the next casualty of Covid, but we were proud to do our job and provide service to society. Our teams even crossed the Maharashtra border and went into Muneri from Dodamarg to help and we enjoyed our work,&#8221; he said. During rescue operations at flood hit areas in Revora and Pernem, firefighters also risked entering water bodies during the day and night to rescue stranded people even as the fear of encountering crocodiles loomed large. &#8220;Our families don&#8217;t always know the kind of risks we take and we don&#8217;t tell them. It&#8217;s only when we are felicitated or when our efforts are reported that they find out much later and gain new respect for their husbands, fathers, brothers,&#8221; Gawas said.

Rome not built in day, next time will form govt: TMC

Margao: Trinamool Congress Goa desk incharge Kirti Azad said on Tuesday that the party would form the government in Goa in the next five years following the next state assembly elections. Responding to queries posed by reporters over its dismal performance in the last state assembly elections, Azad exuded confidence of the party gaining strength in the state. &#8220;We are going to do it. Everything will be in place. Rome was not built in a day,&#8221; he said. Pointing out that the TMC polled 8.7% votes in the last elections, Azad said, that the party&#8217;s performance was &#8220;800 times better&#8221; than that of Congress and BJP in their first few elections in Goa. &#8220;If you compare it to what BJP did in the first three elections and what Congress did in the first four elections, you will find that we have done 800 times better than them. They couldn&#8217;t even get 1% vote share,&#8221; he said. Azad was appointed as its Goa desk incharge of the party after its state president Kiran Kandolkar as well as senior functionaries of the party resigned from their posts soon after the state assembly elections. When asked to comment on the exodus of party workers, Azad said, &#8220;Good riddance. I wish them all the best for what they have done. At least we know who stands with us. Those who are going to be with us are not opportunists.&#8221; The cricketer-turned politician, however, chose not to respond to questions over whether the TMC would back candidates in the upcoming panchayat polls.

Panaji: A photograph of a pillion rider with a gun tucked into his trousers caused a stir on social media on Monday. Goa police inquired about the visual, which was reportedly taken at Mapusa, only to find that the weapon was a fake gun. “The two persons in the picture were identified. On verification, it was found that the gun is a lighter. In view of the sensitivity of the matter, necessary preventive action has been taken against the duo and the toy gun seized,” SP North Shobhit Saxena tweeted. The two-wheeler was a Karnataka registered vehicle. The post evoked sharp criticism. “So now in Goa guys tuck guns in their pants and show off. Is this a new trend,” said one post. Another post said, “Home minister is busy with the history of the state so the law and order is for?”