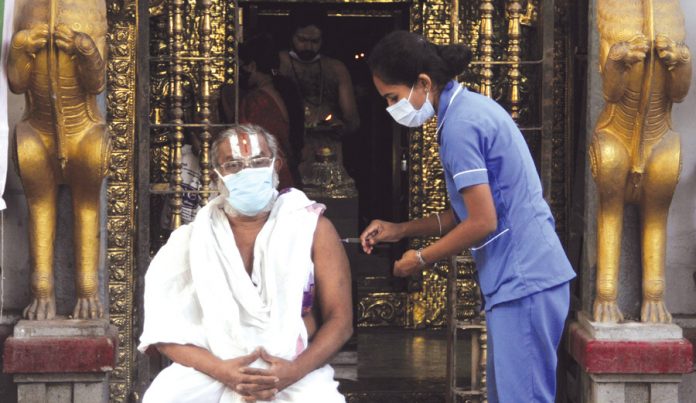 M’rashtra, K’taka, Tamil Nadu, Kerala, Delhi and U.P. emerge as states of concernNew Delhi: Deaths as against active cases have been significantly lower in the third wave of the COVID-19 pandemic than the previous one, the government said on Thursday underlining the current surge is not witnessing increase in severe illness or death following high vaccination uptake.Presenting a comparison of the key indices during the second and third surge in India, Union Health Secretary Rajesh Bhushan said that on April 30, 2021, there were 3,86,452 new cases, 3,059 deaths and 31,70,228 active cases and the proportion of fully vaccinated people that time was 2%. On January 20, 2022, there are 3,17,532 new cases, 380 deaths and 19,24,051 active cases and the proportion of fully vaccinated people is 72%, he said.“So it shows that deaths as against active cases have been significantly fewer in the third wave of the COVID-19 pandemic than the second wave, while the vaccinated population has increased significantly from the second to third wave.“By this, we want to tell you that vaccination is effective. The disease remains mild and in moderate levels in fully vaccinated individuals,” Bhushan said as he urged those who have not yet taken their first vaccine dose to take the shot and those who are overdue for their second dose to get fully inoculated.“We track children’s data too, 0-19 years age group in 2020, they contributed to 10% of the total cases and 0.96% of total deaths. In 2021, 0-19 years contributed to 11% of the total cases and 0.70% of total deaths happening because of COVID-19. Between 2020 and 2021 there is not much of a difference either in terms of contribution of this age group or in terms of contribution of this group to total deaths,” he said.Indian Council of Medical Research (ICMR) Director General Dr Balram Bhargava said, “The current surge in India is not witnessing an increase in severe illness and death because of high vaccination uptake. However, we have to remember one point, those with co-morbidities should monitor their health and avoid complications.” “To summarise, vaccines prevent death and, therefore, is a must,” he said. He added that the overall test performance in the country is being maintained at a level comparable with the second wave.The NITI Aayog member (Health) Dr V K Paul drew attention to the fact that there are still about 1 crore people (in the over 60 age group), who are yet to get their first dose and 25% are yet to get the second dose.“This is unfinished work. 52% children have been covered in the 15-17 years age group, more healthcare and frontline workers should also come forward. Availability is not at all an issue here. 6.5 crore people’s second dose is still overdue,” he said.“But why should it be overdue, everyone should take their second dose. All those who are not fully protected will not only be a danger to themselves, but others too. We have to accept masks and protect our seniors and the prevention tool here is vaccination and we need to take it in this paradigm,” Paul said.Providing an update on COVID vaccination, Bhushan said 94% of India’s adults have been administered the first dose, while 72% are fully vaccinated. He said 52% of the adolescents in the 15-18 years age group nationwide have received their first dose of COVID vaccine with Andhra Pradesh topping the list with 91% followed by Himachal Pradesh at 83% and Madhya Pradesh at 71%. “Young people in the age group of 15 to 18 years have actively participated in the vaccination drive,” he said.Also, 61.75 lakh precaution doses have been administered to healthcare workers, frontline workers and those aged 60 and above with co-morbidities.Maharashtra, Karnataka, Tamil Nadu, Kerala, Delhi and Uttar Pradesh have emerged as states of concern because of rising weekly cases and positivity. More than 11 states and Union territories have more than 50,000 active cases of COVID-19 while 13 states and Union territories have active cases between 10,000 to 50,000.The number of districts reporting weekly case positivity more than 5% has increased from 335 (in the week ending January 12) to 515 (in the week ending January 19).Twelve states and Union territories including Chandigarh, Himachal Pradesh, Delhi, Haryana, Telangana and Andhra Pradesh have administered the first dose of COVID vaccine to 100% of the eligible adult population. On the number of samples being genome sequenced so far, Bhushan said the figure is 1.64 lakh genomes and it is a good number even in comparison to western countries.